The three types of wealth – Money, Time, and Clan 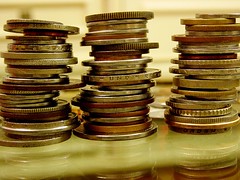 After reading this article on the phenomenon of Farmville I revised my notions of wealth.  I previously categorized wealth in the following two ways:

Up until reading the Farmville article I limited my definitions of wealth to the above two categories.  Reading the article crystallized my notion of clan wealth.

Please note, I’m using the Southern American definition of Clan, which I define as a group of people related by blood, marriage, friendship, or history of friendship which has an intricate network of mutual obligations and debts and acts as one unit on divisive issues.  (Please also note, nothing in this post relates to the KKK).  In American pop history the Hatfield and the McCoy groups serve as the best example of clans.

I define Clan wealth as membership and position in the clan.    Clan Wealth is a product of relative position within the group times the overall strength of the clan as a whole.  Someone rich in clan wealth would be someone able to make decisions for a powerful group of people, much like Joseph Kennedy.  IIRC Tim Ferris writes about this in his book, but he defines clan membership as a means to the other forms of wealth, i.e. a tool, not wealth in and of itself.  The Farmville essay delves deeper into the inner workings of mutual obligations.  I do not intend to invest many resources into this version of wealth, but quiet millions of people are investing their time and money (the other two forms) into developing clan wealth right now.

More thoughts on this to come I’m sure.

This entry was posted on Thursday, April 22nd, 2010 at 2:36 pmand is filed under Misc, Networking, theory, wetware . You can follow any comments to this entry through the RSS 2.0 feed. You can leave a comment, or trackback from your own site.

3 responses to “The three types of wealth – Money, Time, and Clan”