How to fix the Login failed for user ‘IIS APPPOOLASP.NET v4.0’ error in IIS7 and Sql Server 2008

The Problem: You are trying to access a sql server database from your new ASP.net 4.0 site and get the error Login failed for user ‘IIS APPPOOLASP.NET v4.0’ error in IIS7 and Sql Server 2008 when logging in with the integrated security.

The Cause: The new default user for asp.net 4.0 does not have default login permissions.

The Solution: I was going to write this up, but GotToKnow.com does such an excellent job I thought I would just link to their post Login failed for user ‘IIS APPPOOLASP.NET v4.0’ error in IIS7.  It is an excellent site for that sort of information.

How to fix lengthy database records in SQL Server

The Problem: You wish to truncate database records, but you can’t remember how.  At first, Google is no help.

The Cause: You are using the term “Truncate” which is usually used to truncate a table, when all you really want to do is chop characters off of overly long database records.

The Solution: Use the “Left” syntax, as in

How to fix being blocked by your web host 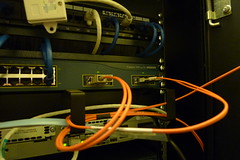 The Problem: For no known reason I became unable to reach my web host.  All of my websites and even the host’s public site vanished.  I could reach everything through remote desktop connections, but not from my home connection.  I had just backed up two gigs of files from one of my servers and I assumed that the web host had blocked me  (mistaken profiling).  After much back and forth with my host’s tech support team they unblocked my IP Address.  I still could not reach my host.  I inform tech support of that; they do some more digging, and they tell me that I had never been blocked at all.

I then think that my ISP (Comcast) has blocked me.  I call them, and after resetting every single part of my workstation’s DNS system, router, and modem I still cannot get to the web host.

We try connecting the workstation to the modem with a new network connection and Eureka!  It works!

I try accessing the sites again via the router, and then get the original error.  I scour the router admin screens (a four year old Linksys) and cannot find any restrictions.

I resign myself to buying a new router and do a hard reset (reverting back to the original configuation) of the existing router, just to see if that works.  It does not.  In fact, the entire router stops working.  I let it run for about 20 minutes and the router still has not reset itself.  I then do another hard reset (just for fun) and the router resets itself within 30 seconds and works perfectly.  I’m even able to get to my web host again.

The Cause: No idea, animal spirits and a gypsy curse seem to be the likely culprits.

The Solution: Two hard resets of the router seemed to do the trick, no idea why.  I did not have to get a new router, but I would like those four hours back though.

A wonderful time at Future Media, and Social Network Analysis

I had a wonderful time yesterday at the Startup Showcase at the Georgia Tech Future Media festival.    It was thought provoking on many, many levels.  One of the most insightful moments was when I realized that everyone referred to Stronico as “Social Network Analysis” in contrast to the term I use which is “Personal Network Visualization”.  Both of them mean the same thing, but majority does rule in popular terminology.

I’ll be at Future Media Fest at Georgia Tech

I will be featured in their Startup Showcase, come check it out today at

The Problem: You attempt to publish your C# ClickOnce application in Visual Studio 2010, but you get the “How to Fix “Cannot Publish Because a Project Failed to Build” error” error. There are no syntax errors.

The Cause: No idea

The Solution: Simply right click on the solution in the Solution Explorer, and click “Publish” – no idea why that works, but it does.

How to fix the Asp.net CalendarExtender and CompareValidator to accept European date formats

The Problem: You want to use the standard European Date Format, DD/MM/YYYY instead of the American Date Format MM/DD/YYYY.  You change the “Format” feature of the CalendarExtender to “DD/MM/YYYY”, but then the CompareValidator (which you’re using to ensure valid dates) calls out that you have entered an invalid date.

The Cause: The Compare Validator is expecting a different date format than it receives, and throws the error.   You will then notice that there is no “Format” attribute on the CompareValidator.

The Solution: Add the following line to the System.Web portion of your web.config file.