As part of my series on simple business metrics, I write this elaboration on metric #6 – Project Length., to wit, how long should a project last from start to finish. This might sound like an odd thing to track, but hear me out.  And yes, I know that longer project lengths can be a sign of larger projects. 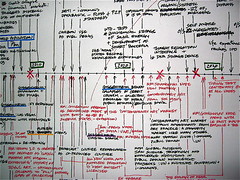 I’ve found that I usually set (within certain limits) the duration of my projects.   The client then modifies the duration based on my starting point, and then the actual duration drifts in either direction.  I’ve found that I am well served by getting the initial project length right.   Here are some positive and negatives I’ve come across over the years:

Positives of a short project length

Negatives of a short project length

Positives of a long project length

Negatives of a long project length

Track your hourly rate over time to make decisions easier

Our Hourly Rates © by SMcGarnigle

As part of my series on simple business metrics, here is an elaboration on metric #5 – Overall Hourly Rate Over Time., to wit,  are you more productive per hour than you were in the past?  You won’t know this if you don’t track your hourly rate over time.  It sounds simple, and it mostly it is.  I’ve found that tracking your hourly rate over time makes many decisions easier.    Here is a partial list of the insights:

Insights from a Rising Hourly Rate

Insights from a Falling Hourly Rate

Why you need to use tools to track your time

What is the right size for web development projects?

As part of my series on simple business metrics, here is an elaboration on metric #3 – Project Size., to wit,  what is the right size for web development projects for your firm?  The answer is not necessarily “Larger”.

I’ve found that my projects consist of varying percentages of:

Each of the above varies by client of course.

After a few years you will have some notion of what the right size is  for you and your company.  Too far below this size and you find yourself spending too much time and money on estimating, proposals and accounting for the project to be profitable.  Too much above this size and you find yourself outside your comfort zone and spending too much time and energy on client management,  project management, and one time capital items.  You can lose money on projects that are too small or too large.

However, one happy thing about doing multiple projects for the same client is that client management and project management will decline over time (as percentages).

In closing – I ran this by several friends as I was considering the article and got a wide variety of opinions, some agreeing with me, some not.  This is only my experience, your mileage may vary, etc.

When should you invoice for web development projects?

As an elaboration on my simple metrics post from yesterday I’m sharing my personal experience with each metric.  The first metric is “How long do clients take to pay their invoices.”  Why is that important?  The main reason is obvious – your money is safer with you.  And to get paid you must first invoice.  I’ve tried several methods over the years and here are some thoughts on when to invoice for web development.

After nine years in business at the best web development shop in Atlanta, here are the simple business metrics I wish I had kept from the beginning.

I track all of these simple business metrics in my Profit Awareness web app.  Indeed, I wrote the app because it is too much of a pain to do it manually, and QuickBooks is of absolutely no help at all with most of them.

Why you should NOT burn your boats, bridges, or escape routes

I recently came across the blog post “Founders: Burn Your Boats” on Hacker News and found it to be the exact wrong advice.  The logic behind the argument is that by removing your escape routes (boats) you are committing totally, and focusing your attention on your startup company, and you will of course be happier. will be more successful.   A good example would be not doing consulting work while working on your startup.  “Burning boats” works for marriage, where “forsaking all others” is one of the main points of the whole endeavor.

However. if you have a startup company, you’re only trying to make a product.  Total commitment is, at best, a necessary evil, not a virtue.  Sure, you’re showing commitment to other people, but why not just show them an  awesome product?  By “burning boats” the only thing you’re doing is putting yourself in a weaker negotiating position with venture capitalists, and looking good instead of doing good.

The introvert’s guide to getting out of bank fees

Do you wind up paying bank fees because you’re introverted, shy, quiet, or just too well bred to complain about such things?  There’s no need to pay the fees.  Here’s how to get out of them.

I recently bounced a check because I chose the wrong account in the online bill paying process (I have two accounts with that bank, one of which I rarely use).  I had tons of money in the other account.  I got hit with a $35 fee and a warning that they would hit me with another fee if I did not make the account cash positive in five days.

This fee annoyed me.  I started with this bank  in 1998, how dare they charge me anything?

I decided to get out of the fee, with a modified version of the script from the best personal finance blog ever.  I say modified because the past few times that I’ve used Ramit’s script verbatim it hasn’t worked, so I changed it to fit the situation and my conversational strengths.

Here’s what I did

First I put money in the account to show good faith and put myself on the moral high ground.  Then I waited two days.

Then I called, somewhat awkwardly (I’m not great at this sort of thing, but I’m getting better) and asked nicely for the bank to remove the fee.  The customer service rep very nicely refused.

Then I come to a full stop and enjoyed the silence, waiting for him to move next.  Note, I did not end with a question.  This is key.  If you end on a question, people can give you a short answer.  If you bury the question within a wall of statements,  people feel obligated to refute your entire argument (which took me about five minutes to deliver).  Did he check with his supervisor if it was okay to refund the money “Just this once”?  Yes he did.

Why did all of this work?  I emphasized

The takeaway:– If you’re long-winded and don’t end with a question you make customer service do more work, which they don’t want to do, so they give in.  Try it out.

PS – the code word for this type of fee forgiveness is “Relationship Refund“.