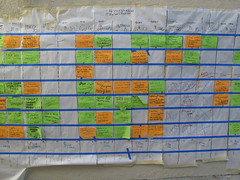 While pondering installing Visual Studio 2010, as well as thinking how all software is moving to a subscription basis, I had the thought – why not do two predictable releases a year?  The first release, say in January, would be whatever new features were in place by that date.  The second release, say in July, would be a pure performance and usability release, as the development team would spend half the year optimizing and tweaking the code, as well as fixing all bugs.  Any new “Features” would have at least six months to cook in the minds of the developers and would be implemented on a much stronger code base.

For whatever reason I find this sort of open, public, rule based scheduling more appealing than the current approach most companies (including mine) follow.  As one must commit to software these days the process of development is important to my decision to buy in the first place.  I’m not sure I have any real reason to believe in this, but it would seem that this approach would be more likely to fix problems that actually exist, as well as resulting in greater usability.

In sum, the idea is that software scheduling should have the following characteristics

Thoughts?  This is actually close to Milton Friedman’s idea of a monetary rules to replace a gold standard, instead of monetary policy being arbitrarily set by the Federal Reserve.

This entry was posted on Thursday, February 25th, 2010 at 1:23 pmand is filed under Biz, Microsoft, Sentiment, theory . You can follow any comments to this entry through the RSS 2.0 feed. You can leave a comment, or trackback from your own site.