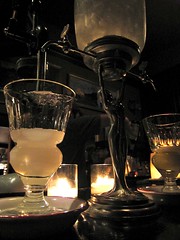 I’ve always wanted to join a secret society.  Membership in an organization like minded people of diverse backgrounds (key features of any worthwhile group in my opinion) devoted to some specific purpose could be quite handy to belong to have.  The “secret” angle of everything is in place to keep it small, and exclusive, which is the key to getting (and keeping) good members.  A small group can also stay focused over time.  It’s a matter of quality control rather than criminality.

Sadly there does not seem to be any company devoted to forming and maintaining secret societies.  I think it could exist, and most of it would happen on the web.  Such a company would have the following features.

Basically the site/company would serve as a grizzled member of the group – similar to Bobby Elvis on the show Sons of Anarchy.  It could also offer discounts on membership card, mugs, events, etc.    I would like to join the bluegrass and woodworking versions of these.

This entry was posted on Sunday, February 28th, 2010 at 9:56 pmand is filed under Free Ideas . You can follow any comments to this entry through the RSS 2.0 feed. You can leave a comment, or trackback from your own site.